Swords in the Mist (Ace Books, 1968) by Fritz Leiber was originally published in paperback as the third book in Ace Books’ complete seven volume saga of Fafhrd and the Gray Mouser.

The stories is this volume are “The Cloud of Hate” (1963), “Lean Times in Lankhmar” (1959), “Their Mistress, the Sea” (1968), “When the Sea-King’s Away” (1960), “The Wrong Branch” (1968), and “Adept’s Gambit” (1947). “Adept’s Gambit” was the very first Fafhrd and Gray Mouser story written in 1936, only to be rejected for publication in Weird Tales magazine. It did not appear in print until after World War II in the hardcover collection Night’s Black Agents (Arkham House, 1947). H.P. Lovecraft himself read “Adept’s Gambit” in manuscript after Leiber’s wife Jonquil opened a correspondence between the Leibers and Lovecraft that lasted until Lovecraft’s death in early 1937. Lovecraft became a great champion of “Adept’s Gambit”, calling it “remarkably fine & distinctive bit of cosmic fantasy”. The draft that Lovecraft read and critiqued is now lost, but we do know that Leiber removed the overt Cthulhu Mythos references in the story and eventually created the world of Nehwon rather than continuing to set Fafhrd and the Mouser’s adventures in the Mediterranean and Near East of Antiquity.

The other particularly notable story in Swords in the Mist is “Lean Times in Lankhmar”, which was originally commissioned by Cele Goldsmith for the all-Leiber November 1959 issue of Fantastic magazine. Leiber’s career had hit the doldrums in mid-1950s partly due to alcohol problems, so Goldsmith’s commissioning of “Lean Times in Lankhmar” was significant step in bringing back Fafhrd and the Mouser. New tales of Nehwon would appear regularly after that up until the late 1980s, enshrining the Twain as Leiber’s most beloved creations.

Jeffrey Catherine Jones provided the cover art for Swords in the Mist, opting to create an overall mood of mystery and epic adventure rather than a literal depiction of a scene from any of the stories. Once again though, the trade dress of later printings constrained and compromised the overall effect: 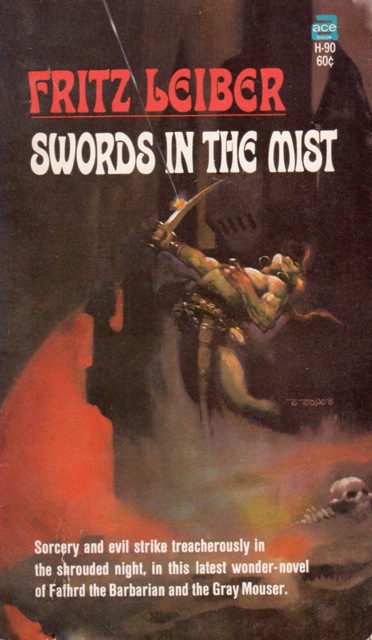 TSR continued to hold the role-playing game license for Lankhmar during the 1990s, publishing the following adventures for Advanced Dungeons & Dragons, 2nd Edition: LNA1: Thieves of Lankhmar (1990), LNA2: Newhon (1990), LNA3: Prince of Lankhmar (1991), LNQ1: Slayers of Lankhmar (1992), LNR1: Wonders of Lankhmar (1990), and LNR2: Tales of Lankhmar (1991). Additionally, Lankhmar: City of Adventure was updated for AD&D 2E in 1993 and it was followed by the sourcebook Rogues in Lankhmar in 1995. TSR’s last Lankhmar product was the boxed set Fritz Leiber’s Lankhmar: The New Adventures of Fafhrd and Gray Mouser (1996), which was both a campaign setting and a stand-alone game featuring a stripped-down version of the AD&D 2E ruleset. TSR self-destructed shortly thereafter in 1997 so that was the end of Lankhmar in Dungeons & Dragons. That wasn’t the end of Fafhrd and the Mouser’s adventures in roleplaying though, but once again that’s a story for another day….

Fafhrd and the Gray Mouser (Dark Horse, 2007) – This is a trade paperback collection of the 1991 Epic Comics series scripted by Howard Chaykin with pencils by Hellboy creator Mike Mignola. In the mid 1990s Mignola would also go on to provide the cover art and interior illustrations for White Wolf Publishing’s four-volume collected edition of The Adventures of Fafhrd and the Gray Mouser.