Jack Vance originally wrote the loosely connected stories that comprise The Dying Earth while serving in the United States Merchant Marine during World War II. Vance’s fiction had started appearing in pulp magazines as early as 1945, and The Dying Earth marked his first book publication when it was released in digest-sized paperback in 1950 by Hillman Periodicals, best known as a comic book and magazine publisher.

The Dying Earth appears not to have been particularly successful at first, as it was not reprinted even as Vance’s career went on an upswing in the late 1950s & early 1960s. Hillman ceased publishing in 1961 and Lancer Books snapped up The Dying Earth, reprinting it in paperback in 1962 with a cover by the ever-versatile Ed Emshwiller depicting the denouement of the story “Ulan Dhor”: 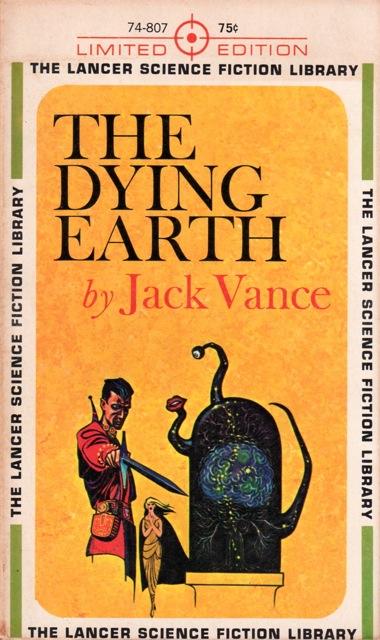 The Dying Earth did well enough that Lancer kept it in print until they went bankrupt in 1973, by which time its reputation was such that it has remained in print to this day through a series of different publishers. No doubt the continued success of The Dying Earth led Jack Vance to revisit the setting starting in the mid 1960s. These new stories that would eventually be published as The Eyes of the Overworld (1966), followed by the post-Appendix N books Cugel’s Saga (1983) and Rhialto the Marvellous (1984).

Gary Gygax wrote in issue 2 of The Excellent Prismatic Spray (2001) that he first became a fan of Jack Vance after reading The Big Planet (1957) in the pulps in the early 1950s and then was “absolutely enthralled…as no work of fantasy had done for a long time” with the publication of The Eyes of the Overworld in 1966. The Dying Earth further cemented Gygax’s love of the setting.

When it came time to devise a magic system for Dungeons & Dragons, Gygax felt that a “Vancian” system of memorized spells that are expended when cast and that then must be re-learned before casting again was the best way to provide flavor and balance the magic-user against other classes. The Enchanter series by L. Sprague de Camp and Fletcher Pratt would provide the situational pre-conditions for spellcasting in D&D, but these spell components were often glossed-over, as Gygax laments as early as 1976 in issue 6 of The Strategic Review, the predecessor to Dragon magazine.

Gavin Norman’s The Complete Vivimancer reads as if David Cronenberg had decided to create a D&D magic-user class, please check it out if you’re looking to add some mad scientist/body horror flavor to your games. (RPGNow affiliate link)

Theorems & Thaumaturgy is a broader treatment of alternative magic-user classes, including the Elementalist, the Necromancer, and a pared-down version of the Vivimancer. A free, no-art version is available here. (RPGNow affiliate links)

Gavin Norman’s The City of Iron gaming blog is very much worth your time as well.

Greg Gorgonmilk’s excellent Vancian Magic Supplement compiles many of Gary Gygax’s writings on the origins of the Dungeons & Dragons magic system from Dragon magazine and other sources. Definitely check it out as well as the rest of his terrific OSR blog.